Melanie B. the British-Jamaican owner of Yoga BamBam, couldn’t get enough of Bao Ho’s work after the self-taught artist and illustrator painted a mural on the wall next to her studio during an HKwalls event in March. So much so that she has invited Bao back to draw on her studio’s glass doors which are now covered in naked goddesses drawn in marker pens.

“I like mixing things – human bodies, animals, flowers, patterns,” says Ho, who is still filling Yoga BamBam with her art in time for a Vernissage in a few weeks time. “Yoga BamBam is a place that made me feel relax and inspired. It makes me think of the movement of bodies and some henna tattoo patterns, so I started to do my piece with these two elements.” 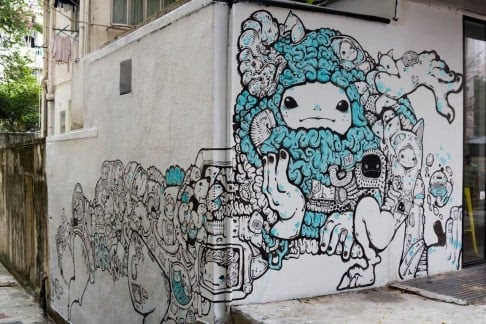 A mural by artist Bao Ho, painted as part of a HKwalls event next to Yoga BamBam.

“After I did this work for YogaBamBam, I got commissioned to launch the opening of Madura Art Gallery in June. It’ll be a good chance to share my art with more people.”

Since its founding in 2014, Yoga BamBam has been supporting the local street art scene. For HKwalls’ first annual Street Art Festival, Melanie B. let street artist 4 Get About It transform their metallic shutter; during the street party Pound Lane Market, fashion designer and artist Zoie Lam (better known as Zlism) covered the studio’s mirrors with temporary ink during a live drawing session. 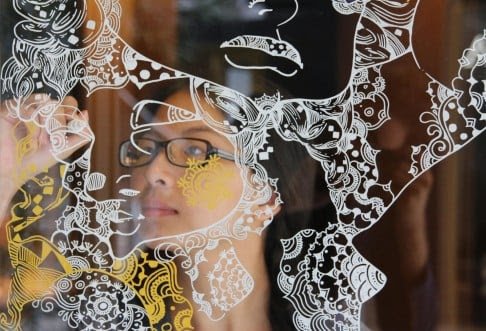 Yoga BamBam’s owner liked it so much she invited Bao to illustrate her studio’s glass doors.

“In Paris, [where I moved from], art is everywhere, from mosaic Space Invaders popping up like mushrooms on our street corners to jazz music being played in almost every taxi ride home,” says Melanie B. “Yoga BamBam organically turned into an art gallery because art is a part of everyday life.”

She adds that the delicate, temporary nature of the works – even a misplaced finger on the mirror or glass panels will alter the art – echoes the essence of Yoga. “This artistic fragility challenges Yoga students to be totally mindful of their movement and the domino effect of uncontrolled action,” she says. VY 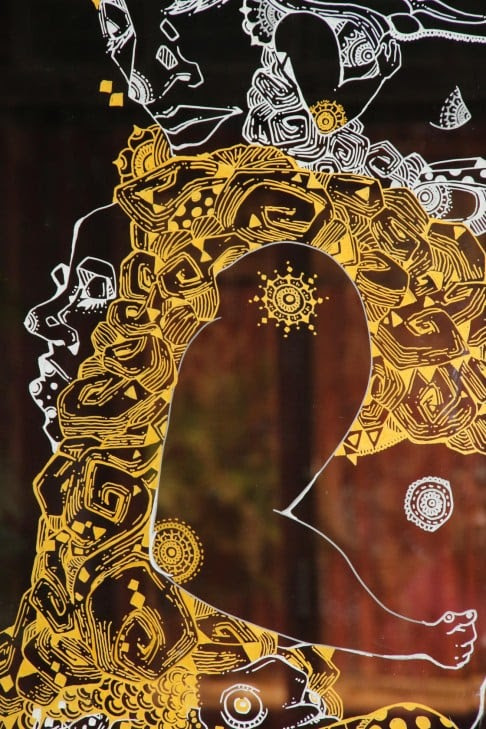 Upcoming Vernissage of YogArt Party at Yoga BamBam by Bao Ho in June.  Follow  Yoga BamBam on Facebook for the details.