Yoga strengthens the body and calms the mind – but are people practising it for the wrong reasons?

If you ask those joining one of the city’s yoga classes why they practise. the reason will most probably be to get fit. So much focus has ben put on the discipline’s physical benefits that it is even being seen as a jetlag or hangover cure.

Celebrity yogi Tara Stiles, for example, has created her own Strala Yoga system which promises a modern spin on the 5,000-year-old practice. She has been so successful that she has been offered book deals, a product line with Reebok, and an invitation from former United States president Bill Clinton to support an initiative to combat childhood obesity.

Yoga is not just about the body – participants should also focus on calming the mind. It comes as no surprise that her recent group yoga session on the W Hotel’s 76th floor swimming pool was a hit. Guests staying at the hotel from now on – and the brand’s other locations around the world – will be able to try her specially designed yoga sessions such as “Big Night Out?” or “Need to Recover?” using tip cards and prerecorded videos in their rooms.

But it is also a well-known fact that yoga has its spiritual side – so why is so much attention being put only on what it does for the body?

Pure Yoga instructor YaYa Joseph strikes a pose. Yoga is not just about the body – participants should also focus on calming the mind. (Photo: Gareth Brown)

“There is nothing wrong with approaching yoga as a physical exercise at first,” says Victor Chau, co-founder of Avocado Development. “For most people, it’s a lot easier to understand how our body works before tapping into [our] mind.”

He thinks that hangover cure or not, anything that encourages people to do yoga is a good thing. But he also points out that those “cures” are merely positive side effects and not the true benefits.

There doesn’t appear to be any doubt that certain types of yoga can make one stronger physically – but some people believe focusing on just that can be dangerous.

Melanie B, owner of Yoga BamBam on Pound Lane in Sheung Wan & in Cental, says: “Advanced poses are like the proverbial carrot for those students who need to set challenges and goals for themselves.

“I don’t consider a person a true Yogi if they are not vegetarian or if they don’t have a meditation practice.

A strong body with an unruly mind can be a dangerous combination.” She says an advanced practitioner aims for a healthy body and a peaceful mind.

That opinion is shared by Paveena Atipatha, regional yoga director for Pure Yoga. She points out that one of the immediate effects of yoga is that you can focus on your practice and let go of everyday worries while you are in the studio. The second step, she continues, is what happens “off the mat”. 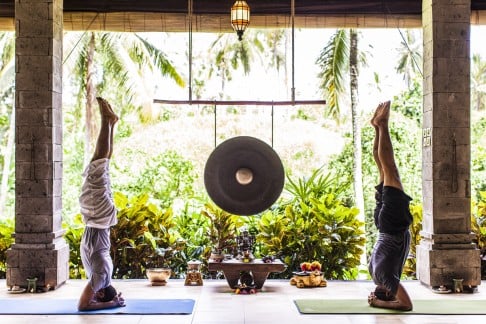 Iyan Yaspriyana (left), one of the co-founders and leaders of ONEWORLD’s ‘Follow Your Dreams’ Bali retreat programme, and instructor Wayan Partawan

“[After yoga], people are blissful. They feel really great, they say ‘thank you’, and they are really polite. That feeling can be maintained throughout the day. That’s your challenge: Can you do that? Can you walk around feeling better about yourself, and therefore treating others in a better way?” she says.

But what happens when the first thing that people see after a yoga class is an email from their boss streaming through their mobile phone?

Smartphone addiction and information overload are modern ills that have become so prevalent that there is a growing number of “digital detox” holidays being offered for those who can’t beat the habit.

Chau believes there is a point to that growing trend of retreats or detox breaks. “There are already many different theories and research showing that the more digitally and virtually connected we are, the less we are connected with one another and to our inner self,” he says.

In October last year, Chau led 20 yoga enthusiasts from Hong Kong and Beijing on a yoga retreat in India. The group, which included Chau’s business partner Ashish Bahuguna, took a gruelling nine-hour bus ride from New Delhi Indira Gandhi International Airport to Ganga Beach Resort in Rishikesh, commonly known as India’s “yoga capital”. Their purpose: a nine-day highly structured itinerary consisting of early morning meditation, hours of daily yoga practice, and lessons on Hindu philosophy and Ayurveda – all done in a yoga room looking out towards the Ganges. Breakfast, lunch and dinner consisted of purely vegetarian dishes, and there was no alcohol served on the premises, or even in the town itself. 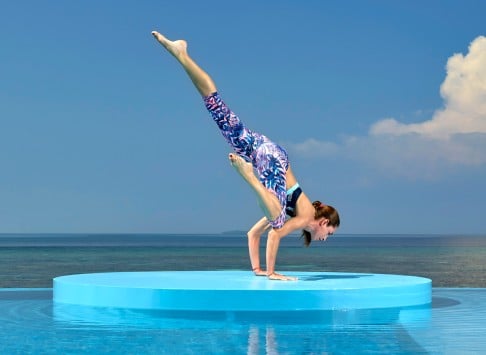 Celebrity yogi Tara Stiles (above and below) has created her own Strala Yoga system that promises a modern spin on the 5,000-year-old practice. Photo: Paul Reiffer

The yoga classes involved some rather stringent vinyasa poses such as the side crow and inversion, but Chau, who led the group, echoes Melanie B’s sentiments that the physical challenge was not the only purpose of the programme.

“The yoga poses are the tip of the iceberg, and what lies under water is what the full picture is. To me, Hindu philosophy and Ayurveda are what’s under water,” he explains.

Pure Yoga offers yoga retreats led by different instructors at a varied selection of destinations ranging from the sun and sand of Bali and the Philippines to the more remote Namibia and Bhutan. Some of these retreats include luxurious accommodation.

“The real reason why you go on retreats is to step away from your present environment into one where you are pampered, and you can enjoy yourself and focus on yourself. And you add yoga to that mix, which brings even more heightened awareness. And hopefully you get home feeling even better, more ready and recharged,” Atipatha says. A schedule is put in place on these trips to ensure that there is a balance between practising yoga and personal free time. In some cases, there are spa treatments; in others, there can be healthy nature walks.

Another yoga experience, rated highly on TripAdvisor, is ONEWORLD retreats at Kumara Sakti in Bali. One of the regular programmes is “Follow Your Dreams”, led by co-founders Claude Chouinard and Iyan Yaspriyana.

“It is a full week of introspection, where participants decide what they seriously wish to achieve in life,” Chouinard says. “We seldom take the time to go deep within and ask ourselves: ‘What do I truly want?’ “ Activities on the itinerary include yoga, meditation, island discoveries and rituals. The island’s Hindu tradition is also part of the experience. 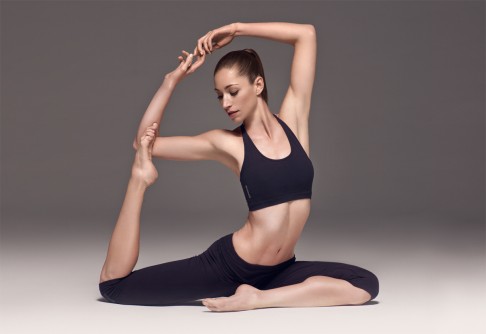 Alcohol, surprisingly, is allowed at Kumara.

“Participants are able to order beer or wine during the retreat. However, they very seldom do,” Chouinard says. “Some guests will find their balance in life with a glass of wine, and we have no objections to that.” The variety of yoga retreats out there is as diverse as retail options in a shopping mall. At the end of the day, it is up to each of us to browse through the offerings and find the right fit.

Don’t want to fall right back into the rut after your yoga retreat? Here are a few simple life changes you can consider to enjoy the benefits of yoga back home, as recommended by yogis.